Woodson Lumber Company On December 1, 1913, brothers Jim and Harrie Woodson opened the doors of Woodson Lumber Company in Caldwell, Texas. The store sold building materials and hardware to local builders, contractors and non-commercial retail customers. Everyone was welcome in the store, and that is a tradition that has continued for the past 100 […] Read More >>

A modern approach to traditional fencing

Technological advancements help make fences stronger, longer-lasting For years, conventional wire products like barbed wire and field fence, have dominated the fencing industry due to limitations in manufacturing and technology. Those factors, combined with the widespread availability of traditional fencing products, have left land owners with the misconception that the best options for livestock containment and […] Read More >>

Now Backed By a 50-Year Warranty

United Ag is made up of eight different divisions making it one of the most diverse and unique cooperatives in the United States. Located in the heart of the Gulf Coast, United Ag represents 1,000 members but services customers in 10 counties. Read More >>

Producers Cooperative Association is a proud supporter of The 50-Year Fence and one of the largest local agricultural supply cooperatives in the nation serving more than 10,000 farmers and ranchers in central Texas. Read More >>

Learn About Our 50-Year Warranty 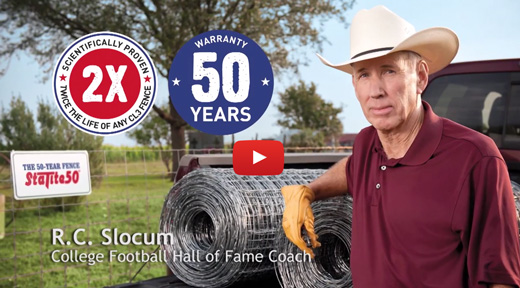